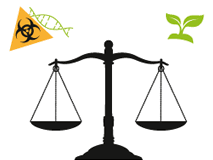 Testbiotech, the European Network of Scientists for Social and Environmental Responsibility (ENSSER) and the German non-profit organisation Sambucus, are together challenging a decision made by the EU Commission to authorise a new genetically engineered Monsanto soybean. The case will be heard at the EU Court of Justice (T-177/13). The legal action is further supported by the Society for Ecological Research, the Manfred-Hermsen-Foundation for Nature Conservation and Environmental Protection, the Foundation on Future Farming and the German Farmers’ Association (ABL). MON87701 x MON89788 soybeans were authorised in the EU for use in food and feed. They are grown predominantly in Brazil and sold under the brand name Intacta. These plants have a unique combination of two genetically engineered traits: They express a so-called insecticidal Bt toxin and are resistant to the herbicide glyphosate, commonly known under tradenames such as Roundup. According to the complainants, the European Food Safety Authority (EFSA) has failed to carry out the legally required risk assessments for these genetically engineered soybeans. Therefore, the EU Commission should not have given permission for the marketing of derived products. The reasons given to the court for challenging the decision are, in particular,

The EU Commission gave its permission for the use of these soybeans in food and feed at the end of June 2012. In August 2012, six organisations filed a complaint against this decision. The EU Commission rejected the complaint in January 2013, but three of the organisations were allowed to file a legal case at Court of Justice of the EU (CJEU), under EU regulation 1367/2006.
In March 2013, the appeal was filed at the CJEU. In September 2013, Monsanto, the European Food Safety EFSA and the British Government joined together on the opposing side to support the EU Commission. The General Court of the EU dismissed the legal challenge in December 2016. In February, the appeal was filed (C-82/17 P)  at the European Court of Justice (ECJ) The appellants are seeking clarity on fundamental legal questions concerning EU authorisation of genetically engineered plants.

Specific risks associated with these soybeans

1. The residues from spraying with glyphosate

In the EU, there are already 12 so-called genetically engineered soybean events authorised for import. Each year, 30 to 40 million tons are imported into the EU, mostly for animal feed. Nearly all of these soybeans have been engineered to be resistant to glyphosate and contain residues from spraying with this herbicide. This is also true for the soybean Intacta. At present, final conclusions on the risks for human and animal health cannot be drawn in regard to the residues. On the one hand, the European Food Safety Authority EFSA – contrary the World Health Organisation WHO – considers glyphosate to be low risk. On the other hand, EFSA clearly stated in 2015 [http://www.efsa.europa.eu/de/efsajournal/pub/4302] that they cannot assess the health risks of the herbicide residues present in the genetically engineered soybeans. This is because glyphosate is not used as a single ingredient in commercial products such as Roundup, but always mixed with further additives to make the herbicide more effective. Some of these additives are known to be more toxic than glyphosate itself. Consequently, the consumption of soybeans such as Intacta carries a significant risk which cannot currently be sufficiently assessed.

As already mentioned, Intacta produces an insecticidal protein, a so-called Bt toxin known as Cry1Ac. This toxin is not only effective against pest insects, it can also can trigger immune system reactions in humans and animals. Therefore, it might enhance immune system reactions to other components such as allergens present in food and feed and also cause inflammatory reactions. Taken all together, these findings raise valid concerns because all soybeans produce several very potent allergens. It is thought that the Bt toxin could enhance reactions to the allergens present in the soybeans. This concern is further heightened by other plant components found in all soybeans; these are proteins such as trypsin-inhibitors that can prevent or prolong the degradation of the Bt toxins during digestion. Consequently, the Bt toxins can impact the immune system for a longer period of time compared to the ingestion of Bt toxins in isolated form. The quantity of Bt toxins that might be consumed with the soybeans is unknown since production of Bt toxins in the plant tissue varies in reaction to environmental impacts. Further, a wide range of techniques can be used to process the soybeans in food and feed and these may also influence the content of the Bt toxins in the final product. All in all, there are no sufficiently reliable data on the content of Bt toxins in food and feed, making it impossible to determine the actual risks.

Finally, there are combinatorial risks. The residues in the crops from spraying could in combination with the Bt toxins enhance the overall toxicity of the single components. There are investigations showing that Bt toxins can impact organisms that are not normally susceptible to the Bt toxin, but are negatively impacted if the Bt toxin is co-administered with other stressors. This problem could also affect the safety of food and feed derived from these soybeans, but has likewise not been investigated by EFSA.

The organisations involved in addition to Testbiotech:

Lawsuit filed at the European Court of Justice, March 2013: www.testbiotech.de/node/772

Text of the complaint filed in July 2012: www.testbiotech.org/en/node/691

Findings of the Advocate General regarding the appeal (October 2018): www.testbiotech.org/node/2287

The decision of the Court in December 2016: www.testbiotech.org/en/node/1788